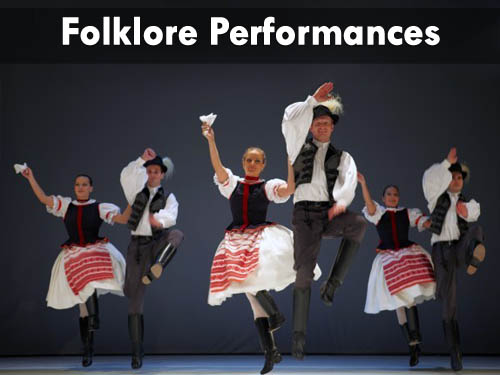 1. The Hungarian State Folk Ensemble (program of “Hungária Koncert”):
The Hungarian State Folk Ensemble – regarded as one of the best in Hungary, was established in 1951. Its aims were to collect and play authentic folk music and to preserve the Hungarian folk dances and traditional costumes of Hungarian-inhabited areas by putting them on stage for the public.
During the more than five decades of its existence, the Ensemble has achieved its aim by revitalizing the culture of the Hungarian people. Their rich and colourful repertoire entitled the Ensemble to be regarded as one of the top touring groups in the world. It has performed in 44 countries across four continents and won the admiration of an audience of more than seven and a half million people. In the last few years the Ensemble encountered special interest in the United States and Canada – which was illustrated by their fourth invitation to undertake a three-month coast to coast American tour in 1994. They have also toured the Far East and Western Europe. The Ensemble consists of 30 dancers, 14 members of the Gipsy Orchestra and 5 members of the Hungarian Folk Orchestra. The choreographies are all based on authentic dances, some of them were collected in isolated villages with dance elements dating back hundreds of years.
The extraordinary folk music that inspired Liszt, Bartók and Kodály is put on stage by both the Folk Orchestra and the world-famous Gipsy Orchestra. The 5 members of the Folk Orchestra play authentic, traditional instruments and perform Hungarian folk music at its highest artistic level. The famous Gipsy Orchestra plays both dance accompaniments and performs alone. Their rich repertoire includes folk music which inspired Hungarian and international classical composers such as Liszt, Brahms, Kodály and Bartók. Apart from its performances around the country and abroad, the Ensemble gives approximately 90-100 performances annually in its Corvin tér theatre, in the Budai Vigadó.
Every performance starts at 20:00, and consists of two 40-45 minutes sessions, with an intermission.

2. Danube Folk Ensemble (program of „Hungária Koncert”):
Founded in 1957, the Danube Folk Ensemble is one of the most popular professional groups in Hungary. The members of the ensemble are both excellent dancers and musicians. The Ensemble consists of 24 professional dancers and 5 musicians. The Duna Dance Workshop, working closely with the Duna Art Ensemble, gives opportunities for the creative experimentation and theatrical presentation of the hungarian folk dance. Göncöl Orchestra also gives individual concerts based on authentic folk music. The aim of the ensemble is to perform genuine dances with dynamism and style, and to create innovative dance-theatre pieces on these principles. In addition to establishing a distinctive style through the vision of their artistic director, Zsolt Juhász, the ensemble regularly works together with noted guest choreographers.
Their work enhance the rich repertoire of the Danube Folk Ensemble. The Danube Folk Ensemble`s repertoire includes some gems of Hungarian folk dance tradition, while the Hungarian folk music is faithfully interpreted by its musicians. Varied and broad, the repertoire provides for several full concerts which are unique. The ensemble gives over one hundred performances each year, including weekly shows at the Duna Palota (sitting map of the Duna Palota) and folklore and dance-theatre performances both in the theatres of Budapest and all over the country. Besides presenting its own repertoire, the ensemble has participated in various theatre productions such as János Vitéz – a musical tale, King Stephen, Attila – rock operas and the opera Dózsa György.
The Danube Folk Ensemble is consistently included in the events of the Ministry of the Interior and at celebrations of National Holidays. These performances take place at the Parliament building or the Buda Castle, and are usually shown live on national television. In the last 20 years the ensemble performed in England, Cuba, Poland, Australia, France, at the Sevilla Expo, in Finland, Romania, Austria, Switzerland and Italy.
Every performance starts at 20:00, and consists of two 40-45 minutes sessions, with an intermission.

3. Hungaria Folk Ensemble and Orchestra (program of „Hungária Koncert”):
The world famous Hungária Folk Orchestra and Ensemble’s work is based on decades old musical and dance traditions. The ensemble was founded by gypsy musicians. Their gift is born from the traditions of century old gipsy dynasties.
The exceptional professional skills of the Hungaria are due to a special educational method that concentrates on preserving their natural aptitude for improvisation an essential precondition of virtuosity.
The Hungaria Orchestra performs in many different formations. The fifty strong main orchestra and the six to eight splinter chamber groups are equally celebrated guest on the world’s most prestigious stages. They are also adept at accompanying well known soloists and dance ensembles. The incredible range of their repertoire covers many genres from classical to folk music, and from operettas to gipsy music, of course. The success and achievements, which have already been enjoyed by the Hungaria Orchestra, include highly successful tours throughout Europe, North and South America, Australia and Far East, where they have thrilled and fascinated audiences. They have often appeared on National Television and Radio and have a number of acclaimed recordings.
An equally high reputation has also been gained by the Hungaria Folk Ensemble. This group of about 60 fiery performers owes its current status to decades of hard work by their predecessors. They specialise in Hungarian folk dance but are equally able to perform operettas, ballet, and modern dance. The high professional attainment of the dancers is largely due to eight to ten years of intense training which begins at a very early age. They are true professionals dedicated to achieving the very highest standards.
The fame and recognition of Hungaria Folk Ensemble has become associated with that of the Hungaria Orchestra as they often perform folklore and operetta programmes together, their joint spectacular show always attracts large audiences wherever they go. Every performance starts at 20:00, and consists of two 40-45 minutes sessions, with an intermission.